If NASA steps out

At dinner last night, Amanda asked me, “So, do you think NASA should be scrapped?”

After a long, blank stare and a lot of blinking, I finally admitted I hadn’t thought about it. CPR skills come in handy at times like those, since I’m usually so opinionated. 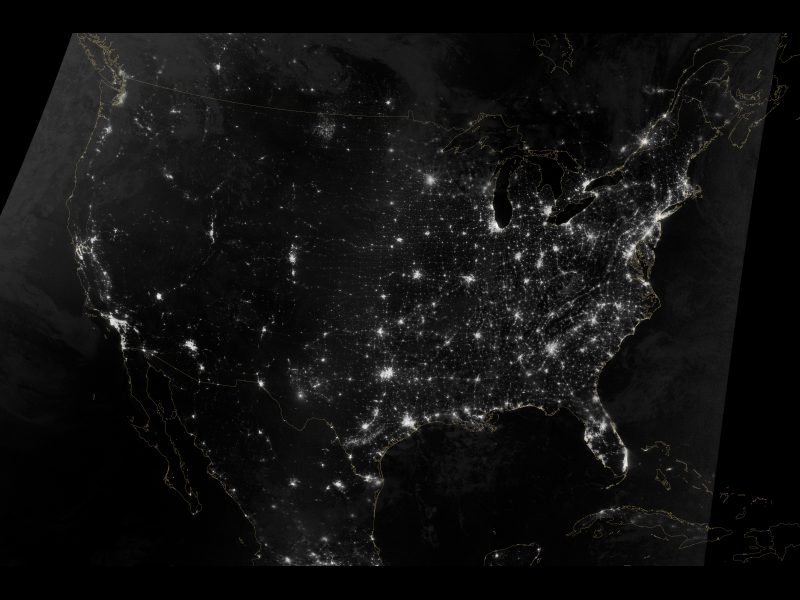 US Visual Infrared Image… Lighting the Paths Across the U.S.

So, I thought about it.

My internal philosophy seems to tell me that people are inherently good, government is inherently evil, and government programs turn their followers evil. So if I plug NASA into the equation, it sounds like private enterprise would be good. But do they have enough incentive in 2005 to explore space? And should they even bother?

No doubt, a great idea in the 1960’s, but private enterprise isn’t big on doing things for the sake of doing them – and well they shouldn’t, since their respective stockholders would burn them at the stake.

The publicly funded programs of NASA, however, operate under the large blank check backed up by our tax dollars. This provides a certain leeway that hinders a rapid transition to private sector space exploration projects. Don’t forget, though, that most Space Shuttle missions are loaded to the gills with private and public research projects that are paid passengers, if you will. An ambitious private firm may find a positive bottom-line operating as the vessel for other businesses cargo and research. Certainly part of their research and development will run toward expanding their services – in this case, traveling further, faster, safer than (gasp) their competition.

I believe there is great value in space exploration for the sake of exploration, so I don’t think NASA is spending our money for the wrong thing – however, there’s a good chance they’re spending too much of it.

Michael Crichton has said that “the current pre-occupation with safety is at best a waste of resources and a crimp on the human spirit, and at worst an invitation to totalitarianism.” Certainly not the least of those wasted resources can be measured in dollars. Don’t get me wrong – I don’t think any program, business or endeavor should waste human lives or ignore safety, but given the hugely immeasurable risk of strapping highly flammable components to oneself and burning them to leave our atmosphere, a focus on safety can quickly mute progress.

The safety focus may provide yet another hurdle in the transition toward private sector projects. If the private sector operates under intense government regulation – as it certainly will, it will face not only the risk of running afoul of the government, but its shareholders as well. With luck, this will lead to rapid, out-of-the-box development of safer means for escaping gravity as well as better projection against the debris that speeds through space.

What does the private sector offer?

Our government-run space program competes only with the fear that the program of some other country will exceed its capabilities.

Private space programs compete to provide carrying capacity (sorely needed), useful research vessels and, no doubt, tourist travel. This is all happening now at some scale.

What will it take to build a private sector space program?

The government will have to bow out. Until it does, NASA has a winning formula that will crush all comers. Any firm with the ability to beat NASA at its game will be legislated out of existence, at least so long as that space program operates on US soil.

I suspect we may see giant leaps from private sector space exploration firms in the next decade, but it’s clear those firms will be operating on friendlier soil. I suspect the tolerance for risk of life amongst shareholders will be another big factor in determining which country hosts the next super-power of space.