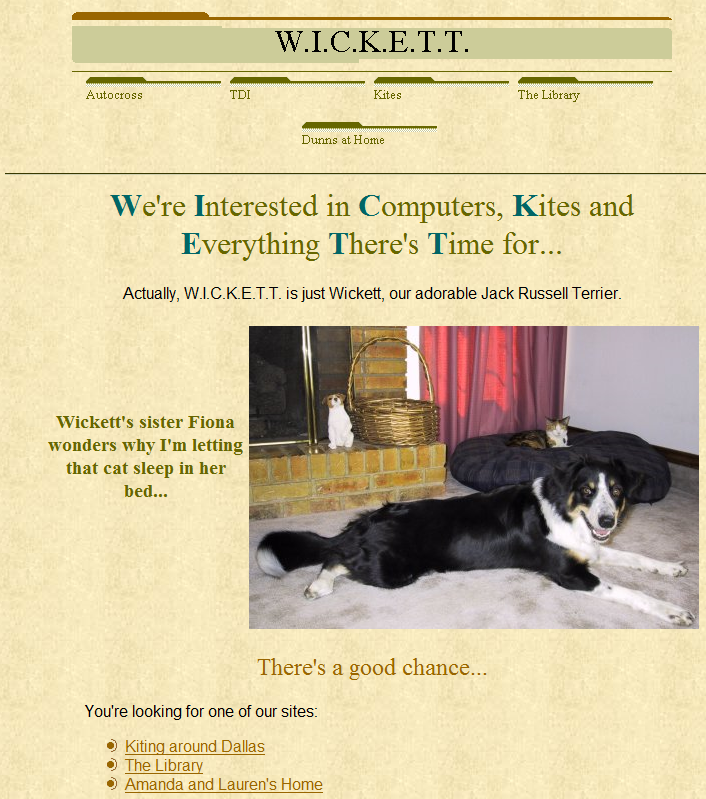 Wickett.org came to life in 1997. Changes in ISP’s resulted in our e-mail addresses changing 6 times in 7 months. It was time for stability. And since we had a domain name, we might as well put up a website.

The first incarnation was static HTML living on a FrontPage enabled server. Groovy! So groovy, in fact, that it still lives.

The first “fancy” wickett.org ran on pMachine. Now available as an open source platform, pMachine is incredibly fast and has some nice features. I really should apply some of my current understanding of css and html layouts to a pMachine site. I cut my teeth on building the holy grail – the table-less css layout building pMachine sites.

Some sites I was maintaining needed some features that pMachine didn’t provide. Mambo seemed like a great choice. And it might have been. But development of Mambo fractured. Bugs and security holes popped out of every corner. Mambo had to go.

Wickett 4.0 – Layout originally applied with bitweaver. I liked it so much, it hung around for Wickett 5.0 on Drupal.

Mambo still lived on for some sites I maintained, but it grew more and more unruly and prone to hacks. Some sites I managed to talk into using alternatives. The Miata site became forum only.

A friend suggested I play with bitweaver. It was a tad slow, but it had all the features I needed, and I learned a lot about page design building the Wickett 4.0 layout. In fact, I liked the layout so much, I kept it! The 4.0 site is also still living at least until the next time a mandatory (read: security related) upgrade for bitweaver comes out.

I’ve been recommending Drupal for new sites and have built quite a few over the past few years. I’ve been meaning to convert Wickett for quite a while, but the cobbler’s kids usually do go barefoot. Drupal properly configured runs rather faster than bitweaver, and it has some modules that do a better job at presenting some info than the stock bitweaver modules.

One of my frustrations has been finding a base site template to build from – as is frequently a concern when using content management systems. Zen themes were a godsend. Suddenly, I had a true and proper blank slate to start from, and within an hour, I had the foundation of the design you see here now up and running.