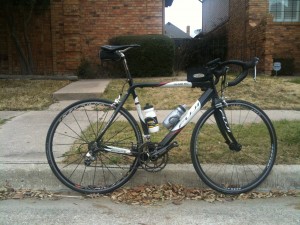 Fuji at rest on a cold winter’s day in Dallas

We year-round cyclists have a way of rationalizing really cold days. Once the mercury starts to dip below 50, we “ride the thermometer.” 45 degrees? 45 miles.

Last night at dinner we were discussing what/where to ride today. At the time, I wasn’t really keen on another ride downtown, but I knew it was the prudent choice. One of the mysteries of living near a big city is that said big city is largely unoccupied on Sunday mornings. With the multi-lane roads, it makes for a safe place to take a ride on a cold, overcast day. Since temps weren’t likely to clear 35 degrees until mid-morning, we settled on an 11:00 start time.

This morning, I rounded the corner to Big Lots and found Cayla, Martin and Big Dave waiting for me. It was overcast, but not really dreary, so I was willing to try something different, but the response to my “where do you guys wanna go” was a quiet “I wanna go downtown,” from Cayla. Girl votes count more, so it was decided. Twenty minutes later, I was delighted by the choice.

There’s a certain relationship one develops with his road bike. There’s something in the stiffness of the frame, the narrowness of the wheels — the utter absurdity of this gossamer contraption beneath you — but it tells you without words about each inch of road as it flows beneath. You can feel the ripples in the concrete, the texture rolled on to it, the bits of aggregate. You can feel grains of sand left over from the Great Dallas Chirstmas Eve Snow of 2009™. And then there’s the magic that happens when you talk back. When pushing on the pedals and you sense the power as it moves from your leg through your shoe, and the crank turns, and the chain is pulled forward, and the chain pulls the cog and the wheel turns. When the bond is strong, you can even feel the rubber on the tire deform and maybe even slips the tiniest bit as you accelerate up a short climb.

I’ve really come to enjoy the Sunday Rides™ and going somewhere a little different. Perhaps it’s not the best cycling route in terms of long steady efforts on the pedals or efficient movement, but if measured by stress relief, it’s hard to beat. I’m looking forward to temps coming up a bit and extending the Sunday morning route through White Rock and Garland for an even fifty miles later on.

But, today, we rode the temperature. Thirty eight degrees. Thirty eight miles. There’s another thirty eight floating about out there… Can’t quite place it… Right on the tip of my tongue… Well… Happy birthday, Amanda!