It’s been ten years since it’s been properly cold in Dallas. That’s what the weatherman said… It’s only stories like this one from Toronto that make me feel like it’s better to be here right now.

The forecast has been exaggerated a bit in the past, so I was hoping they were being pessimists again this time. I suppose they just can’t risk not telling us how bad it could have been. We have to protect people from the evil weather and all. It turns out they were not exaggerating. Temps never made it out of the 20’s on Thursday and Friday and barely topped freezing on Saturday.

And yet, for some reason, I rode my bicycle Saturday morning. It was a short ride by Saturday standards, but 32 miles is 32 miles. I can’t tell you how unhappy I was to see the three other guys had actually showed up when I rolled into the parking lot at the appointed time of 10:00 am. I would have been happy to have ridden the four miles up from the house, turned around to go home and called it a day. But the four of us — Brent, Marty, The Stud and me — had a great ride north through Craig Ranch into McKinney where it was really nice to stop in and see TT-Bob and Mrs. Bob for cocoa and cookies. Somehow, it was colder on the way back south from McKinney, though… Must have been the changing wind. I made a gross tactical error and opted for the “easier” option on the return leg up Rollins hill by taking the multi-use trail which is not as steep, but slightly longer. I now know that it is also completely shaded and subject to water run-off. 700×23 tires don’t stand a chance on ice. Someday my brain may let me replay that moment and I’ll understand how I didn’t fall.

Since we’d met for breakfast and I’d gotten to pick up my heated jacket liner for the motorcycle, I installed said liner on the motorcycle before I took my post-ride shower. Then I suited up and headed off for a little ride through the countryside. I had to return home for an adjustment, but eventually wound up spending a few hours out enjoying the countryside inside the solitude of my helmet before darkness and dinnertime were both closing in. In the process I got to deal with some demons — the intersection of FM 982 and FM 546 at Lake Lavon is horrendous and looked really scary, but I found a nice straight line to ride and rolled across it without a problem. Not to say I’ll ride across that mess again on purpose… But I handled it well. 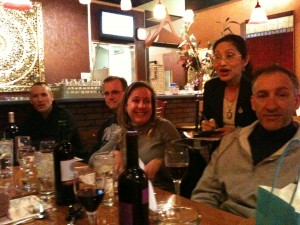 Monty, Darth McPherson, The Colombienne and The Swiss… We have wine, but if the food doesn’t get here soon, it could get rowdy….

There may have been some wine involved, but somewhere along the line I committed to an 8:00 departure for the Sunday ride. Now, I’m the first to admit I like to ride at 8:00 — or earlier once daylight cooperates. It’s nice to get the ride done and have plenty of day left to do other things — whether it’s honey-dos (thanks for keeping those to a minimum, Sweetie!!!) or blasts through the countryside on the VFR. When I made that commitment, the forecast was calling for 23 degrees at 8:00. My thermometer said 15° at 7:00. This was not looking promising… Funny thing about water… is that it tends to freeze at or near 32°.

In any case, 7:58 did roll around, and I was making the corner into the parking lot at Big Lots while trying my best to not see the temperature at the bank (14°). La la la la. I can’t hear you. I had been anxiously checking my iPhone for those “Sorry, we’re bailing” messages since 6:00. No luck. As I rolled around the side of the store, there were four figures astride their bikes. Brent and The Stud again. No Marty, but The Swiss had come out to play. This was bad. All three of these guys are probably faster than me at the best of times. Not quite two months after breaking an ankle and a shoulder blade with the accompanying lack of riding put me in danger.

“No problem,” said the little voice in my head… “When you pop, just sit on the cold ground, and that’ll numb the pain until Amanda comes to get you.”

As it turned out, even after pushing myself yesterday, I was able to keep up most of the day with only a few cries of “Uncle!” Brent did his best to keep us amused by displaying his useless, ice filled “water” bottles. I did my best to remind him of his miscalculation by commenting with regularity on how delicious my Orange Cytomax slushy was (I got lucky… the slushy got really thick right before temps started to properly rise around 10:30, just before we got home). 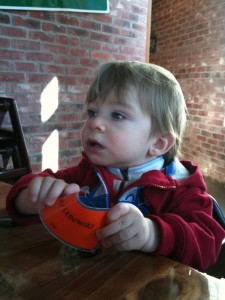 Ryan doesn’t say much, but he knows a good curly fry when he sees it…

We encountered our first excitement heading west on Midbury when we saw the line of ice between us and the intersection. The light mercifully turned red and allowed us to plan our attack. I think it would have been safer to roll it with some speed, but we all managed to walk across it and escape without a fall. We found a few more patches heading south — including a couple ridiculously over-sized patches of ice and slush from folks sprinkling their lawns in sub-20° temperatures. The last ice we saw was crossing Walnut Hill on Ferndale. We had planned on a right turn to Walnut Hill, but the ice told us we’d just be going straight, “Thank you very much…”

We capped the ride off with a bit of communion — a celebratory blast from The Holy Shine in my alley way before going our separate ways. It sounded like Brent was off for the club 1:00 ride.

I took advantage of the early finish time and called Bean to meet for lunch as he’d expressed some displeasure that I was holding out on the location of a newly discovered burger joint. He and his young’un picked me up and we sampled the goodness that is Twisted Root.

Not much later, I learned why we never heard back from our neighbors and fellow cyclists, Warren and Audre, on the dinner invite last night… The space next to their business is apparently vacant… and apparently in Dallas where it only gets cold once every 10 years… they don’t drain the pipes in vacant spaces… Oops! Sounds like damage is minimal, but a weekend spent drying office equipment is a weekend lost…