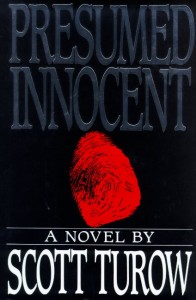 I’m not sure why it never occurred to me to read Presumed Innocent. It’s been a “known work” of modern popular fiction for a while now. Heck, I hear they’ve even made a movie starring Harrison Ford. Yet, somehow, I hadn’t seen the movie or even heard the names Rusty Sabich and Carolyn Polhemus. So, you might ask, “Why now?” Somewhere along the lines of picking up audio books from Audible, Amanda and I wound up with Scott Turow’s sequel to Presumed Innocent, simply titled Innocent.

While listening (to the first half) and reading (the second half) of Innocent, I thoroughly enjoyed Turow’s development of characters—and much of the development alluded to past sins that I knew, somehow, would be detailed in the earlier novel. And, so, while deeply inserted into physics textbooks near the end of this fall semester, I found myself engrossed within the virtual pages of Presumed Innocent on my iPad. A quick note on ebooks… I’m not sure if the publishers create intentional typos in their ebook distributions in order to fingerprint them, much the way that map publishers insert incorrect street information into maps, but stop it! It was awkward in the eEditions of both novels to read about Tommy Motto (Molto) as well as the occasional b transposed with an h.

I presume that if one has seen the movie the secret is out. In this case, one would be reading only to experience Turow’s intense character development. Otherwise, it’s a roller-coaster ride through the political machine that is the Kindle County Prosecuting Attorney’s office. Straight from the get-go, the players are on hand to attend the funeral of Carolyn Polhemus, one of their own, who has been raped and murdered in her home—a home one might note, that was a veritable fortress, yet found completely unlocked.

I’ll confess I allotted an hour here and an hour there to read, but once the trial began, it was exceedingly difficult to set down. Not only does Turow develop strong characters that readers must love or hate, but he also employs a strong sense of pacing, using action and realistic dialog to develop backstory whenever possible rather than lengthy exposition a la Tom Clancy. I will say—at the risk of spoiling it for someone else out there who has read the sequel first but has not yet read the original—that I am immensely impressed by how well Turow jumbled the facts from the case in Presumed Innocent they appeared as they had to in Innocent such that although I knew some things eventually had to come to light, I did not see what was coming until right at the very end. Kudos on not one, but two well developed stories. I feel like I know the folks in the PA’s office of Kindle County now, and while I might not want to trust my lives to any of them, I’d be pleased to meet them.

I also particularly enjoyed the trip in the time machine—remnants of things past. The quaint computer references in Innocent gave way to the Dodge K-Car in Presumed Innocent as one of the police officers drove an unmarked Aries. So glad those things didn’t hang around, as the world is a much more beautiful place without them.

I seem to have a long list of things to read, at the moment, and I suspect it may be tough to drag me away from my iPad over the winter break. I also suspect that more of the Scott Turow back-catalog will find its way onto my reading list.