Life with the WMD: Keeping it classy 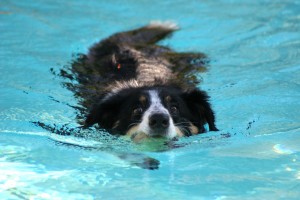 Gotta get the ball!

Within 24 hours of Fiona coming to live with us, I had her enrolled in obedience school. I wasn’t given a choice in this matter — neither by Amanda, nor by Fiona.

Fiona was brilliant at obedience school. Well… mostly… There were two very small issues. One stemmed from her insane drive. She loves to play. She wants to play. More. More. More! The other, I suspect, stems from her separation anxiety. She just doesn’t like to stay. But Alicia helped me with those issues and helped make Fiona and incredibly well behaved, well mannered (OK, so, we had to work on some manners issues, too…) dog. Fiona really enjoyed going to obedience school. Alicia believes in dogs that are well socialized — not just with other people, but with other dogs. Playtime! Fiona was always a laugh riot during playtime. Watching her herd a trio of German Shepards into a corner was priceless.

Once Fiona “graduated” from basic obedience, she qualified to go to Agility school. There, we learned that maybe, just possibly, we hadn’t quite solved the “stay” or, for that matter, gotten a big enough dose of focus to complement the drive. So we did some more obedience work in the outdoor environment at the new facility. And all seemed well. 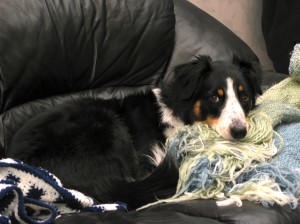 And we started agility work. And Fiona loved it. Over the fences. Through the tunnels. Over the A-frames. Over the dog walks. Even through the occasional weave pole.

Did I mention, however, that in the field adjacent to Dallas Dog Sports there were llamas? Oddly, Border Collies classify other non-Border Collie Shaped Objects™ into only one of two categories… Sheep or Not Sheep. Llamas were quite clearly Sheep — Sheep who very much needed herding.

Here’s how it played out… We’d show up for class or for a practice session. Patty would demonstrate the course or obstacle we’d be working. It would be our turn. Fiona would be anxious to run the course. I’d release her and give commands and run along side and then Snap! Off for the hedgerows runs the Border Collie. She’d pull a few laps of the facility and finally come back. It was funny once or twice.

“Don’t chase her,” Patty would encourage. “She’s trying to get you to play with her.”

Unfortunately, as we now know, Fiona can entertain herself for long hours. There are times I’m pretty sure she has invisible playmates that run and chase with her.

But, one night… a lady training at the facility was wearing Jingle Bells on her shoes. The combo of Jingle Bells + llamas (Sheep!) was just too much. Fiona not only ran laps, but started rallying the other dogs to join with her in the great Border Collie uprising. We were asked, quite politely, to maybe consider taking up crochet. It seemed like a good idea. Fiona made a great transition to lap dog.

In the next installment, we’ll learn about some famous WMD adventures… And perhaps I’ll even share why I keep calling her the WMD…