Ode to a good hot shower

I don’t suppose when Thomas Wolfe wrote You Can’t Go Home Again there’s even the remotest chance he was talking about the shower in my folks’ house. But, as far as showers go… it’s reason enough.

To be honest, I can be certain he wasn’t talking about that shower since the house wasn’t constructed for another decade after he wrote the book… And I’m pretty sure it was yet another decade before the shower in question was added when the basement was finished. And it was a fine shower for years. The hot water tank was fifteen feet away, so hot water was plentiful and right at hand. None of that long warm-up time. But it was dark and rather, shall we say… compact.

I can be even more certain he wasn’t referring to the shower at my in-laws’ house, since it wasn’t built until late in the 1970’s. Not to be the sort to complain, but water pressure is just not its strong suit.

Normal people go off to college and are bothered by the communal showers. I, on the other hand, was thrilled. Lots of room. LOTS of water. No one complained if I took an extra shower during the day.

I knew when it came time to buy our house that choosing the right shower would be crucial. It would be a costly mistake to choose poorly. We wound up with a great choice. A shower stall separate from the tub. The shower head is plenty high so that I don’t bump my head on it. There’s a wait for the hot water, but once it flows there’s plenty. 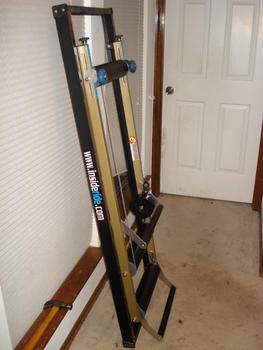 They look so innocent, just leaning against the wall like that…

I know I really appreciated my shower last night. I was rudely reminded the difference between a ride and a workout on the rollers. I’d had the bicycle on the rollers a few times over the winter — mostly verifying that I was in condition to ride after the motorcycle accident. I figured it was far safer to discover a lack of strength in my shoulder indoors with a wall to fall against than on the road.

Last night, however, it was workout time. I programmed the intervals into the Garmin. I queued up the workout music on iTunes. I cranked up the volume. I pulled on my bibs. I tightened the straps on my shoes. I hopped on and rode. Seventy minutes later when it was time to start my cool down, I learned that I had made a little mistake. You see… Having learned this lesson before, I have a collection of workout mixes of varying length… So if it’s an 80 minute workout, I’ve got 70 minutes of GO music and 10 minutes of cool down music. But, due to a computer crash, I wasn’t quite sure where I’d put the collections. So, I decided to let the iTunes Genius™ feature take a stab at it. I picked Tom Sawyer, clicked on Start Genius and hoped for the best. Which was fine until cool-down time rolled up on the clock, and I hear the familiar strains of “Take the Money and Run.” Right. Like I can ease off for that. The next track was Guns ‘n Roses’ “Mr. Brownstone” which let me down enough that I was able to walk to the aforementioned shower. Whew. I know where my playlists are now. And I won’t lose them again.

But throughout the trauma of the extra song’s worth of pain, I knew that my shower was waiting for me. There’s a lot of me that has become a Texan. But when I find myself back home in North Carolina, the thing in Texas that I miss most is my shower…

Maybe Wolfe had a time machine…