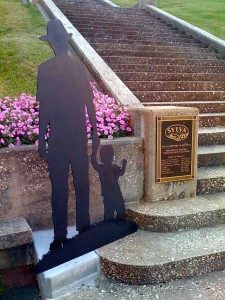 The only black people in Sylva?

I suppose it’s inevitable that you see your own back yard far differently than anyone else could possibly see it. I suspect we all have criteria we use to judge the world and our surroundings. I also suspect we either expect or want those around us to use the same criteria we do. And maybe that’s the root of all conflict in the world.

One of the biggest laughs I had all summer came as I was walking through downtown Sylva with Darth and The Stud after eating at Lulu’s and we reached the base of the court house steps. The Stud blurted out, “Look! It’s the only black people in Sylva!” I was embarrassed at first, fearing someone was around to hear, and then I realized what he was pointing out… Two silhouettes parked at the base of the courthouse steps. But the more I thought about it, I couldn’t conjure up any non-caucasian images in the memory of people we’d encountered during our visit. But I’m not sure that’s entirely different from the people we frequently encounter around Plano. Which is why I’m surprised it even came up. But there they were.

More telling, I suppose are the criteria that we use after initial judgments have been passed. How do we score our friends… the people we interact with every week or every day… what matters? Which traits do we completely overlook? I’ll go out on a limb and say that there’s a good chance I’m completely wrong about the things I think I value most. But, I think my top criteria in friends are that they tell me what’s on their mind and that they can handle it when I tell them what’s on my mind. The Doc loudly and frequently proclaims the lack of a frontal lobe. Unless someone let him have the Do It Yourself Home Lobotomy Kit™ as a teenager, I suspect he’s joking. But I can empathize since I seem to be frequently lacking an inner mute switch. Amanda has been known to kick me in the shins just in time, but usually even she can only roll her eyes and shake her head. So, I doubt that I’m wrong about that one… My friends have to score well on the “Doesn’t freak out when Lauren tells it like it is” test.

Conflict arises when religion or popular culture or government tell you that your criteria are inappropriate. Whether the superficial criteria that cause you to turn away from people who drive Korean cars or wear purple scarves or the deeper down criteria that cause you to be attracted to people who spend their free time building houses for the poor and translating pamphlets on treatments for minor illnesses so that people in rural Africa don’t die from dehydration because of a simple case of diarrhea. It may be tougher to imagine inappropriate criteria for the deeper meaning of life type stuff… But I think people, no matter how hard they may find it to admit, hold dearly to their own judgments on the superficial aspects of life.

I’ll admit that I have a hard time trusting really handsome men. I can’t explain why, and I doubt I’ll ever be able to change that. And by a similar token, if you happen to enjoy driving, looking at or racing sports cars… then I’ll have a darn tough time not liking you. Unless, of course, you’re a really handsome man…

When society… through religion or pop culture or government… says “Oh… no… you can’t prejudge that person just because he’s beautiful” then your rational brain will respond “Oh, of course. I certainly should be open minded.” But your subconscious mind will the whole time be urging “Noooo!!! Handsome men can not be trusted!!!” Eventually, one of two things will happen. To compensate, your rational mind will override and automatically trust handsome men, or you will revert to the product of your upbringing and follow the orders of your subconscious.

So, which path leads to better decision making? I suspect it depends on the nature of each person’s little proclivities. I know that my suspicions are just that… suspicions. And given time, they can be overcome. There are folks who operate with clearly more malevolent predispositions who should benefit from societal pressures to conform — or at least society itself will benefit if they conform.

I suspect in the end, if there is any point at all in being conscious, that it’s crucial that people are different. And that different societies press different values on their members.

Because as tasty as vanilla ice cream may be, it’s a lot more interesting with a dollop of raspberry sauce.