Feedly… Feed your need for news 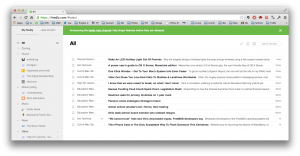 Feedly inside Chrome—It looks the same in Safari.

I was a huge fan/proponent/consumer of Google Reader. RSS feeds didn’t excite me much prior to the advent of that fine service. If I had to keep track of what I’d read and what I hadn’t to be able to read on multiple devices, I might as well just visit web sites. Google changed all that once I could access the Google Reader website from any computer, phone, tablet, etc. in the world and see what was new in my feed list. Sadly, Google decided it was not an important project and gave it the axe. 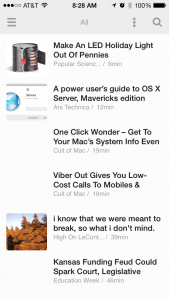 Feedly on the iPhone has the same interface. You can choose whether to display the thumbnails.

Since I didn’t want to give up what I had, I checked out the alternatives. Feedly looked like a good bet, and it was one of the few options that were free. I wound up buying charter lifetime subscriptions to their pro service for both Amanda and me, but their free service works great. One of the features that I really enjoyed in Google Reader, though, was the ability to search my feed. Since 90% of the “new” things I see float through my news feed, it’s a great place to start searching when I see someone and I remember there’s “something I meant to ask you about because I just saw it in the news the other day.” Feedly rolled this out as a Pro feature shortly after launching their back-end news-fetching service; it works great, and it continues to improve with time. 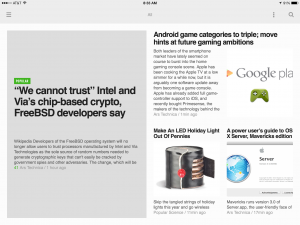 Feedly on the iPad offers the trendy “Magazine” layout made popular by Flipboard.

I actually had tried out Feedly prior to Google giving Reader the axe when my iPhone app for RSS feeds started acting flaky, so I knew it had potential. The question was whether they had or could build a significantly strong back-end to handle the load. So far, I must say the answer is a resounding yes. I’ve seen a couple of brief outages, but I’ve never gone into news withdrawal. Their backend even supports notification from WordPress blogs like this one, so even little guys like me can show up nearly instantly in your newsfeed upon publishing new material. 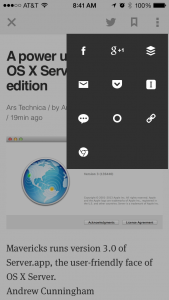 Sharing options abound, and most icons “make sense” after a bit. At least they’re easy to hit accurately, even when “walking while iPhoning.”

As delightful as the Reeder app was, Feedly does an even better job of creating a “different device, same interface” experience. Despite changes in screen size and interaction between computers, phones, and tablets, interacting with Feedly works quite similarly no matter how you access it. Feedly offers all the standard ways of sharing articles with others through Facebook, twitter, and (the ever-popular in some alternate universe) Google+. 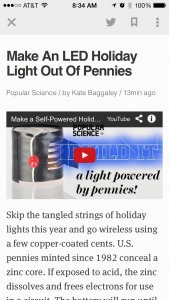 Article view in iPhone makes great use of available space.

There are still a few websites I actually visit directly… Fark.com, for example, doesn’t lend itself to reading through a feed reader, as it is really just a feed of its own. It’s much easier just to check it once a day or once a week, depending on how badly I need to know what’s really going on in the world. I figure if it’s really important, they’ll make fun of it on Fark. I find, also, that adding the Onion can be problematic, as I won’t notice that an article came from the Onion, and I’ll start hoping that Karma is really starting to pay folks back for stupidity…

I’ll address my philosophy on news feeds themselves eventually, but if you’re already an avid RSS consumer and looking for a better way to read, give Feedly a try! 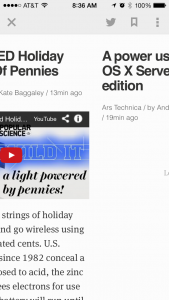 Swiping to the next article is intuitive and makes it fast to skip past the things you don’t care much about.