I’m not one who is dragged kicking and screaming into the future. Quite the opposite, I suppose, I embrace new technologies. I’ll wait for other folks to sort them out, quite often, and find their usefulness, but I thrive on new things. I was hesitant to move into the realm of “smart” phones, even as much as I used my Palm Pilot™ back in the day. Somewhere along the line a phone broke, and my replacement wound up being a flip phone with Microsoft’s mobile OS flavor of the week and my first real mobile data plan. 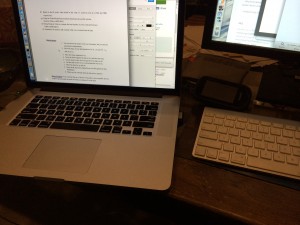 Sometimes I get carried away with multi-tasking… Sometimes when doing homework, I’ve found that I have an ebook opened to different pages on desktop, laptop, and iPad… And the “real” book open to yet another page.

It was a treat to have my contacts and calendar synced live to my device rather than just when I could plug it in to my computer once or twice a day. Despite a limited “keyboard” and no touch screen, it was a quite useful device—even allowing useful Google searches from anywhere. A couple years later, though, Apple changed the meaning of smart phone with the release of the iPhone. It sure smacked of novelty at first, but access to real Internet anywhere anytime had a lot of potential, and 9 months into the initial iPhone run, I bought mine. As testament to the quality of Apple hardware, to the best of my knowledge, my original iPhone is still in daily use with its current owner in Belize.

Since departing working life as a high tech guru and returning to school, I have become an “All Mac all the time” sort of person. For laptops, their hardware is hands down better than anything else out there for most users. Sure, there are hardcore gamers that need more power and don’t mind an 8-10 pound “laptop,” but the current crop of Macbook Pros and Macbook Airs are impressive beasts. I am transitioning back into the mode of desktop computing as we slowly get our house renovated and I actually have a desk, but for a long time I was a laptop-only user. Thus, my 15 inch Macbook Pro was (and is) a perfect compromise between screen space and portability. At 4 pounds, it may not be light by Apple standards, but it’s significantly lighter than my last Windows portable and less than ¼ the overall thickness of that machine. Amanda recently got a 13″ Macbook Air that is barely 2 pounds and has real all-day battery life for “normal” use. I’m hoping to become enough of a desktop user that my next machine down the road will be an Air or whatever the Airs become. 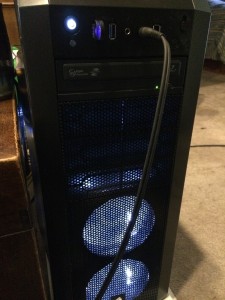 My desktop, however, is an abomination—it is a mélange of hardware with OS X poured on top—a Hackintosh or Customac. I wanted storage configurations that Apple just wasn’t offering with iMacs, and a part of me just couldn’t buy in to the computer stuck in the back of a monitor system. Thus was born my Customac. As close to “standard” as current iMac hardware is, however, the build was painless, and OS X runs almost flawlessly. The only feature I’m missing is AirPlay since there’s a glitch or three if I enable the integrated Intel graphics that are required to make AirPlay work. I can live without it, though, as I have a large SSD with an OS/App partition to make everything fast and a smaller partition coupled as a Fusion drive to a mechanical hard drive so I have lots of room to store photos. Ahhhh… so nice to solve first world problems!

I will say that I recognized the value of tablets quite early. I wasn’t sure they were of value to me, so I was hesitant to spend iPad money early on, but I chanced upon the closeout of the HP Touchpads at $99 several years ago and immediately became a fan. The 10 inch tablet is perfect for viewing PDF versions of textbooks. Most text is readable, and the touch interface makes it trivially simple to zoom in as necessary. I tried a couple other Android tablets along the way, but we just didn’t get along. I also had a brief affair with an Android phone when we switched to Sprint the year that we spent so much time in North Carolina. It was properly disappointing to watch the battery level on that phone drop while it was plugged in to power. I didn’t miss it a bit when Sprint allowed me out of my contract and we switched back to sweet home AT&T.

So, to that end… Yeah… you can take my books. You can take my CDs. Just don’t come for my bits and bytes or the silicon wonders that cart them about.