A great way to spend a Saturday morning 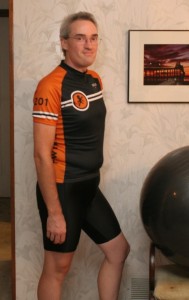 We came out of the gate flying, nearly 18 mph average to the break point. Once again, the Branch break point was a cluster 7v(# with a few 2-intendees getting swept into the 1s and a number of 1s nearly getting left at the church.

A group of 4 got stuck at the light crossing 380 at Bridgefarmer. Kent, I, Jeff, Smurfette, Kai and 4 people I still can’t remember names for opted for a 61.5 mile option after coming up with directions for Chris to get back to the bagel shop.

The loop to Princeton and back into New Hope is FABULOUS with the new pavement. It was hard to keep speed in check (as evidenced by my continued efforts to ride off the front). Fortunately, I’m a nice guy, and did NOT ride off the front since no one else admitted to knowing the route.

We made a quick stop at the RaceTrac on Eldorado and then did Wilson Creek to Valley Creek and through the McKinney neighborhoods to Lake Forest where again the sun apparently went to our brains and got some nice cruising speeds going on the southbound leg.

I got suckered in to a pull up Rollins at the end. Thought I was going to have to get off the bike and have a stroke when a car passed me, saw the stop sign, and then managed to pull SIDEWAYS in front of me and just sit there. Moved just in time and I found some strength in the jello filled stumps formerly known as my legs and huffed it up to the top. Had a nice cruise on in to the bagel shop.

Saw LOTS of bikes all over the place. Lots of groups (some probably the DB Long crew) around Princeton and lots of individuals and families out enjoying the day.