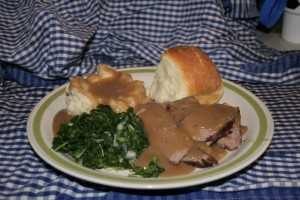 Potatoes are vegetables, right? Right??? So this roast probably won’t be accompanied with garlic mashed potatoes and fresh baked rolls, but it will probably see some greens, since that’s how we roll…

A few years back I visited the topic of smell memory. It’s something I think of a lot as I wander the planet, as I find it almost constantly triggered these days. I was vividly reminded of my olfactory awareness Sunday night as a chuck roast was undergoing its magical transformation by low, slow heat in my oven. Trapped in a Dutch oven with a few friends—onion, garlic, and tomatoes—along with a touch of cumin, the meat basked in the glow of the 190º oven, collagen slowly breaking down and turning into finger-licking goodness. In the process of doing this, of course, the aromatics—onion and garlic—combined with the scents released by the meat and wafted through the house. As I sat upstairs through the evening alternating between reviewing for my Astronomy final, watching Amanda craft secret Santa surprises, and trying to shoo orange cats from my keyboard, my brain kept wandering to days past when my grandmother used to make pot roast.

I’ll confess that some of the memories of actually eating those pot roasts were filled with, well… a lot of chewing. Nell was a fantastic baker. She made some of the best bread I’ve ever eaten. And I recall a number of delicious cakes and confections passing my lips at some time or another. Meat, however, was clearly something that was to be cooked until dead followed by cooking until dead again, just to be sure. This application worked pretty well for chicken legs and thighs on Sunday afternoons, but it left a bit to be desired with hamburgers or, just for example, pot roast.

A funny thing happens with beef cuts high in collagen as they cook under low and slow heat… You Texans will recognize this is the source of barbecue, when applied to beef brisket. Oddly, you North Carolinians will realize this is where BBQ comes from when applied to an appropriate mix of pork shoulder. The rest of you, who are no doubt more rational, will realize that chuck roast and pork shoulder are the same cut from different animals, so it should be no surprise that the same cooking techniques might bring out attractive results in either. And, sadly, we’ve all discovered at some point what happens when these shoulder cuts are subjected to heat just a little too long. You go right past the shoe leather, through the perfect chewy, tasty goodness into something that might best be described as shredded shoe leather. Note the similarities between the starting problem and the ending problem… Finding the happy medium is the key.

But somehow smell memory is a little more vague than all that. Rather than remembering the faults and foibles of the past, my mind goes straight to the times spent around the table with family—often those ultra-rare occasions that brought my mother, father, uncle John, aunt Diane, Nell, and Jack all together for a meal. If it wasn’t Thanksgiving, there was a great chance the table would feature fried chicken or pot roast—along with a vegetable bounty from the garden across the street.

I don’t know if my imperfect olfactory recollections are merely flawed, a manifestation of my generally optimistic view toward life, or a yearning for things long gone. But, I’ve learned to enjoy them. I love the moments—driving down the road or pedaling my bicycle along a tree-lined lane—when I smell fall. It’s the combination of decaying leaf bits and some aromatic plant growing along the way that signals to my brain “fall is finally here.” So in the words of Bart Simpson… “Smell ya later!”