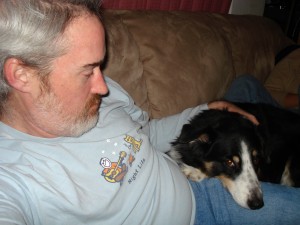 The best part of a run with the WMD

It’s been a while since I tied on my running shoes. October 24th, to be exact, for the 5k at the Austin LiveSTRONG Challenge. Then, I rode the bike 64 miles on Sunday. For two weeks after that event I was “on break” and then, following my return to the bicycle on November 7th and 8th, I was wiped out by a truck while riding to work on my motorcycle. In the process of that little gravity test, a chip of bone was knocked off my right tibia. Walking has been painful — or at least, that is, the aftertaste of walking has been painful. I’m not sure my run last night was the best idea, but I needed it.

I knew it was going to happen as soon as I walked out the doors of the office yesterday afternoon. The warm south wind hit me square in the face. It had that smell to it. Spring comes early in Dallas. It may go back into hiding, but it was here. I had no interest in fooling with lights on the bicycle and fighting the wind. No… it was to be a day of shorts, shoes and embracing the wind.

So, with that in mind, Fiona and I set out for our little run. No watch. No pedometer. Just a boy and his dog. And a poo-bag. Since, it seems, Fiona always has that little extra bit of poo to deposit when we run.

I didn’t have a distance or time goal in mind. Which was good… Since I didn’t have a watch and I’ve forgotten all but the most general of distance measurements for the routes around the neighborhood. I was planning to just pay attention to my body and wander about.

I think it was somehow easier to find a rhythm with my tired legs. When I’ve tried to pick running back up when I’m really fast on the bike, it quickly becomes a torture fest since my legs have the power to fly, but my aerobic system isn’t quite sure what’s going on. But today, after a shaky start, I was able to focus on relaxing and let my legs do what they were made to do. And, suddenly, I was nearing the end of the loop I had put myself on… finishing the last hill back up to the Shell station. According to my map, I ran about 4 miles in about 40 minutes.

As I slowed to a walk for the last tenth of a mile back to the house, I knew that my ankle would make me pay for my little run… But it would be worth it.